Renato Bialetti, the man responsible for the remarkable success of the Moka Express died on February 11, in Ascona, Switzerland. The Moka was invented by Renato’s father, Alfonso in 1933. Mussolini had blocked imports of stainless steel into Fascist Italy and so the Moka, a celebration of Art Deco inspired design was created from aluminium and can now be found in the Museum of Modern Art, the Cooper Hewitt, Smithsonian Design Museum and the Design Museum in London.

The Moka Express enjoyed modest success prior to World War II. After the war Renato returned from a German prisoner of war camp and resumed production. He embarked on a promotional campaign involving billboard, print and eventually media advertising that was spectacularly successful. At its peak, Bialetti was producing 4 million a year and over the past six decades, some 200 million have been sold internationally. It is estimated that 90% of Italian homes own a Moka Express.

The coffee stained Bialetti with mustachioed caricature of Renato is as symbolic of Italy as the mid century Fiat 500 and Vespa. Fittingly, his ashes are interred in a Moka Express in the family tomb. 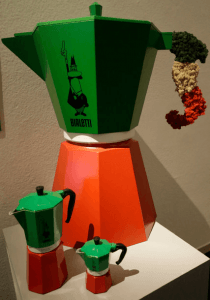